The human spine has natural curves that work together so that a person can stand up tall and well balanced. There are four natural curves of the human spine. There are two lordotic curves and two kyphotic curves that alternate to create an “S” like shape. When looking from behind it is normal to have a straight spine with the head centered over the pelvis. When evaluating from the side, these natural curves balance one another so that the head is directly over the hips.  When there is an imbalance of one of these natural curves a patient’s entire spinal alignment adjusts so that the patient can continue to stand upright.

Flatback syndrome occurs when the low back loses its natural curvature and becomes flat over time. With flatback syndrome there is a decreased lordosis and when this occurs the spine becomes unbalanced and the patient will start to lean forward. Patients may not notice these subtle changes at first but over time they may note difficulty with standing upright or worsening back or leg pain. Symptoms of flatback syndrome often worsen as the day goes on, as the patient tends to lean further and further forward. The severity of symptoms often depends on the amount of curvature present and associated difficulty with standing upright.

In patients with flatback syndrome, loss of the normal lumbar curvature causes an imbalance of the spine. The patient’s head begins to lean forward, away from the body and they have trouble standing upright. The patient’s spine will automatically try to compensate for this imbalance by tilting their pelvis, flexing their knees or hips. This imbalance over time can cause muscle fatigue and pain.

Flatback syndrome was initially noted in patients who previously had undergone a certain type of scoliosis treatment. Scoliosis is an abnormal curvature in the spine. Early types of scoliosis instrumentation, called Harrington rods, allowed the surgeon to straighten and fuse the patient’s curvature but in doing so decreased the spine’s normal lordosis. Harrington rods were commonly used between the 1960s and early 1980s. Many patients treated with this type of instrumentation did very well after surgery. However, decades later due to the unnatural straightening of the spine early disc degeneration often occurred below the fusion. Technology is constantly advancing and updating techniques to minimize long term risk outcome for patients. Current scoliosis implant systems and surgical techniques allow surgeons to correct the spine in multiple planes, decreasing the risk of developing lumbar flatback syndrome. 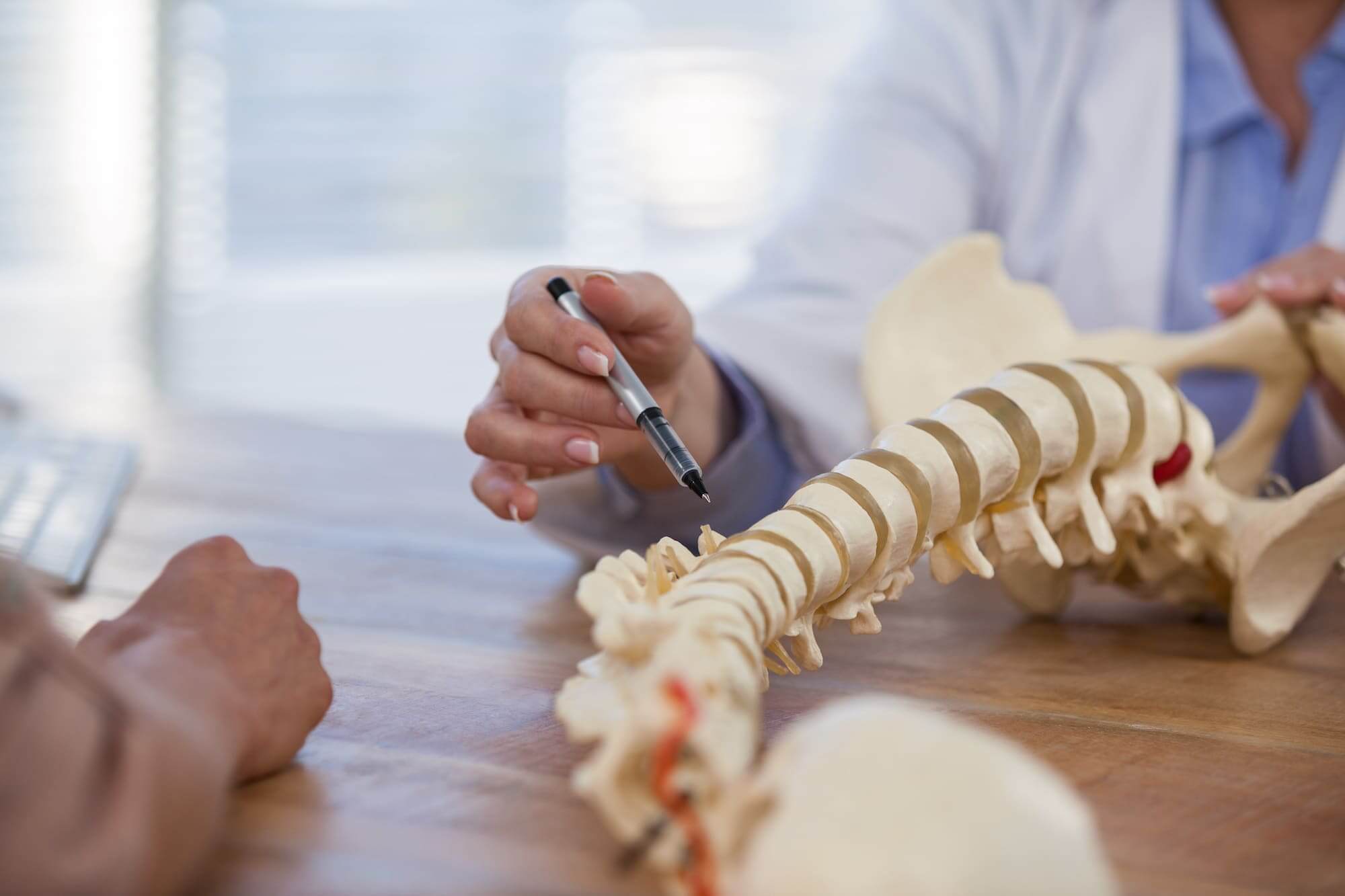 Today, the term flatback syndrome has been broadened to include any patient with a decrease in lumbar lordosis causing symptoms. As such, this can occur with a multitude of conditions such as: degenerative disc disease, Vertebral compression fracture, Ankylosing Spondylitis, and Lumbar Post Laminectomy Syndrome.

Degenerative Disc Disease
The spine consists of vertebral bodies and discs. The discs are the soft tissue cushion and shock absorbers of the spine that allow for mobility. As a person ages it is normal that these discs will wear and tear which can cause asymmetric collapse. As the discs degenerate the spine begins to lean forward and lumbar lordosis will decrease. This can contribute to flatback syndrome and as a result patients may develop pain from their degenerative disc disease or from their spinal imbalance.

Vertebral Compression Fracture
Compression fractures occurring within the spine often are due to an underlying condition called osteoporosis. This is a weakening of the bone and with increased stress a fracture can occur. Fractures change the alignment of the spine as fractures often include loss of height of the thoracic or lumbar vertebral body. This may occur in one or multiple bones throughout the spine resulting in flatback syndrome.

Ankylosing Spondylitis
Ankylosing Spondylitis is a chronic inflammatory disease that affects the spine. Overtime it can cause stiffness, arthritis, and auto-fusion of the spinal vertebral bodies. This fusion causes the spine to be less flexible and can often lead to a hunched-forward posture. With this type of posture there is often increased thoracic kyphosis or decreased lumbar lordosis which can lead to lumbar flatback syndrome.

Lumbar Post Laminectomy Syndrome
Lumbar flatback syndrome may develop in patients who previously were treated with a laminectomy or other spinal surgery to treat spinal stenosis and decompress the spinal canal and surrounding nerves. This procedure may lead to decrease in lumbar lordosis and in some cases spinal instability.

Patients with flatback syndrome often may not know they have this condition because their spine has been changing gradually over time. When a patient has flatback syndrome they have lost the normal amount of lordosis, or inward curve, of their spine so the body adapts by tilting the pelvis, flexing the knees and hips so the patient can continue to stand upright.

Often patients present to our office because of symptoms including back or leg pain, difficulty with doing certain daily activities, or even a sensation of falling forward. Patients may notice worsening posture over time and even sometimes have started to use a cane or walking stick to help with ambulation. Symptoms often worsen as the day progresses because the body is overcompensating leading to excess muscular fatigue. In some cases, patients with underlying flatback syndrome also have spinal stenosis which is a narrowing around the spinal canal causing nerve symptoms. Flatback syndrome is a deformity of the spine and this diagnosis is made through a thorough physical exam, patient history, and x-rays of the spine to look at overall spinal alignment. Radiographs that completely visualize the patient’s cervical, thoracic, lumbar spine and pelvis allow spinal specialists to determine the degree of flatback syndrome. Physical examination is important to the diagnosis; often spinal specialists are able to identify subtle postural changes indicative of flatback syndrome. These changes include decreased pelvic tilt or flexion of the knees and hips.

Often advanced imaging including magnetic resonance imaging (MRI) or computed tomography (CT) scan is also ordered. These studies do not diagnose flatback syndrome but help identify other issues, including spinal stenosis, which may be affected by changes in the spinal alignment.

The goal of treatment for flatback syndrome is to improve patients’ symptoms and quality of life. Most conditions have two routines of treatment: nonoperative versus operative treatments. Non-operative, or conservative, treatments for flatback syndrome include an appropriate exercise routine which consists of aerobic fitness, weight bearing exercises, and core muscle strengthening. These all can help decrease a patient’s pain and improve bone strengthening which may decrease risk of osteoporosis. Spine-specialized physical therapy and spinal manipulation can be beneficial as well. Medications commonly are utilized to manage symptoms. In some cases Flatback syndrome can worsen pain associated with joint arthritis or a pinched nerve in which case spinal injections may be prescribed to provide relief. Many patients are able to stabilize their symptoms with these non-operative means and symptoms do not worsen warranting surgery.

At the Virginia Spine Institute, we help educate you on your spinal condition and discuss all treatment options, non-operative and operative, as well as risks and benefits. Flatback syndrome is a structural problem that often is associated with degenerative disc disease and spinal instability (link to other page) and may ultimately require surgical reconstruction. Surgery may be needed for certain patients that fail non-operative measure or whose deformity is worsening over time leading to other neurologic symptoms. Symptoms often include pain, numbness, or weakness. The goal of surgical treatment of flatback syndrome is to restore lordosis, thus improving a patients overall alignment, quality of life, and stop progression of this spinal deformity.

Surgical recommendations are made after a comprehensive physical evaluation as well as review of all x-ray, MRI, and CT imaging with the spinal specialists at the Virginia Spine Institute. The goal is to provide excellent care to the patient by improving their symptoms and quality of life in the least invasive and safest possible way. Surgery to correct flatback deformity may be performed from multiple or combined approaches.

Our Doctors that Treat Flatback Syndrome